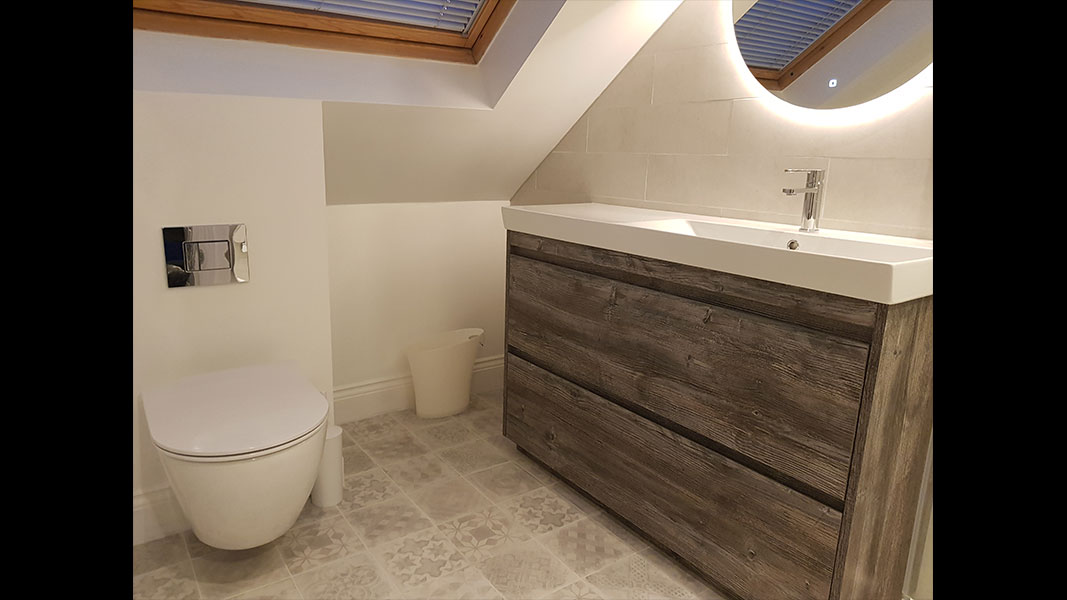 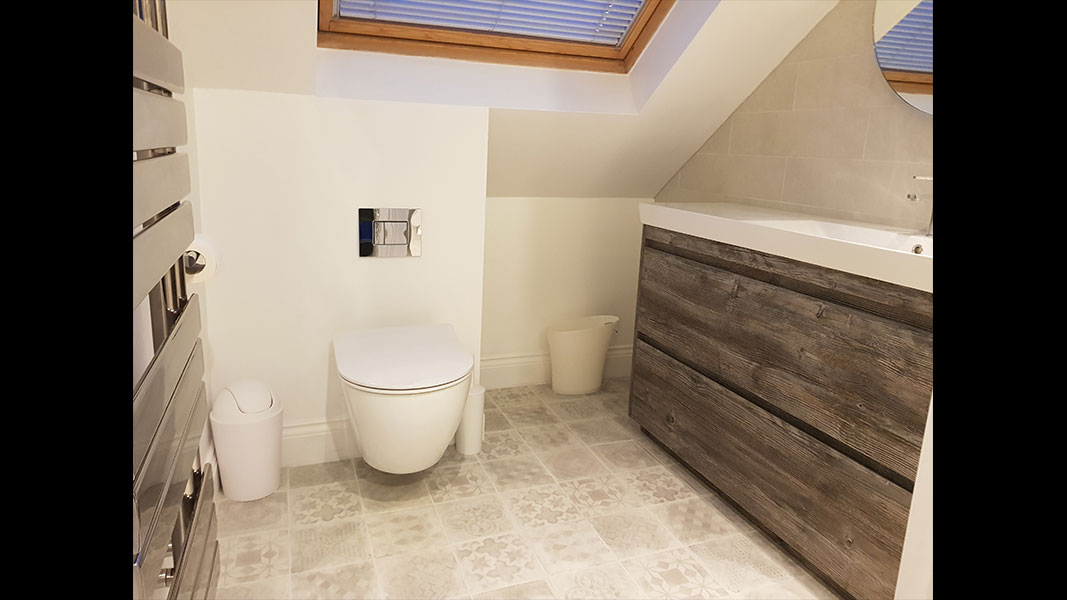 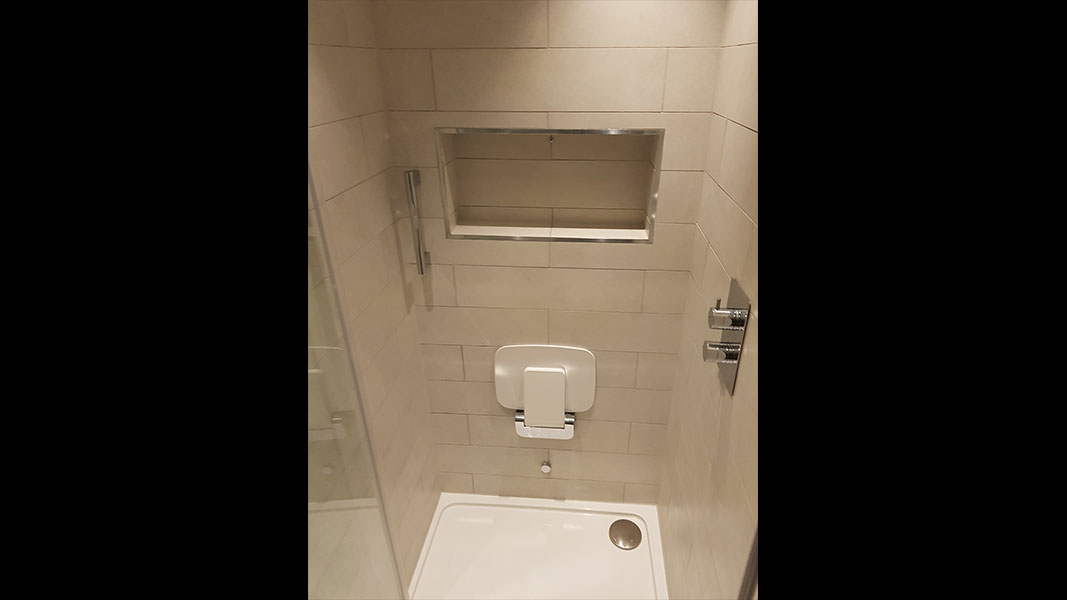 En-suite Renovation including a shower/steam cubicle

Laurence and Faith Zage approached The Bathroom Workshop after receiving a recommendation from a close friend of theirs/past client of ours. They got in touch with us to help them redevelop both their main bathroom and the en-suite in their loft conversion. This page will focus solely on the renovation of their upstairs en-suite, which included the installation of a steam cubicle.

After discussing the changes the Zage’s wanted to make to create their dream bathroom, our designers surveyed the original bathroom, taking measurements of the site, and analysing the existing plumbing and electrical set-up. After a few days, a variety of plans and 3D renders detailing a number of distinct layouts, which included a small steam cubicle, where sent to the Zage’s for their inspection. After receiving their decision and comments on the favourite, and making the appropriate changes a final rendering was produced, upon which the final quote was based upon. As the Zage’s had opted to undertake the interior design portion of the renovation themselves, our interior designer instead walked them through viable options in terms of the fittings (toilet, shower steam generator etc) which were then ordered through The Bathroom Workshop.

The first step for the team is always to provide the appropriate protection to the client’s home. This requires fitting the most durable carpet and wall protection, as well as installing an air extraction system to filter the air in our client’s home, removing as many dust particles from the environment as possible.

After removing the initial tiles and plasterboard from the walls, the team noticed that the leaking shower had done irreparable damage to the joists within the partition. Although this damage had not be foreseen and had not been priced into the quote, we replaced the joists and reinforced the partition as part of our fixed price guarantee, as well as our professional responsibility to carry out works to the highest standard. The next stage was to prepare the bathroom for the new electrical and plumbing set up. As many of the bathroom accessories stayed in their original position this stage was relatively simple, however, as always all the plumbing within the bathroom was updated with new piping and connections to reduce the possibility of any future leaks. Additionally, changes had to be made to accommodate for the steam generator. This required a water and electrical supply, as well as a hot water outlet draining into the shower waste beneath the floorboards. The next stage was to make the appropriate electrical changes to accommodate for new LED spotlights, an extra quiet low decibel fan, and a demister mirror. After constructing a new partition beneath the Velux window to encase the Grohe wall hung toilet frame and cistern, the team began fitting moisture resistant plasterboard to the walls and backerboard to the floor (which allows for some flexibility and thus doesn’t crack the tiles as plywood would. The shower/steam cubicle was then coated with a layer of Ardex pro-tanking system, creating an impermeable seal within the shower. The WarmUp underfloor heating kit was next fitted, and tiling the floor and walls were then completed. Mapei coloured grouting was then applied between the tiles, Keparoxy grout was used within the shower to offer extra protection from the steam. The final stages were then to decorate and fit the hanging toilet, vanity unit, shower mixer and all other bathroom fittings, before testing everything and presenting the newly renovated bathroom to the very satisfied Zages.

We use cookies on our website to give you the most relevant experience by remembering your preferences and repeat visits. By clicking “Accept All”, you consent to the use of ALL the cookies. However, you may visit "Cookie Settings" to provide a controlled consent.
Cookie SettingsAccept All
Manage consent

This website uses cookies to improve your experience while you navigate through the website. Out of these, the cookies that are categorized as necessary are stored on your browser as they are essential for the working of basic functionalities of the website. We also use third-party cookies that help us analyze and understand how you use this website. These cookies will be stored in your browser only with your consent. You also have the option to opt-out of these cookies. But opting out of some of these cookies may affect your browsing experience.
Necessary Always Enabled
Necessary cookies are absolutely essential for the website to function properly. These cookies ensure basic functionalities and security features of the website, anonymously.
Functional
Functional cookies help to perform certain functionalities like sharing the content of the website on social media platforms, collect feedbacks, and other third-party features.
Performance
Performance cookies are used to understand and analyze the key performance indexes of the website which helps in delivering a better user experience for the visitors.
Analytics
Analytical cookies are used to understand how visitors interact with the website. These cookies help provide information on metrics the number of visitors, bounce rate, traffic source, etc.
Advertisement
Advertisement cookies are used to provide visitors with relevant ads and marketing campaigns. These cookies track visitors across websites and collect information to provide customized ads.
Others
Other uncategorized cookies are those that are being analyzed and have not been classified into a category as yet.
SAVE & ACCEPT