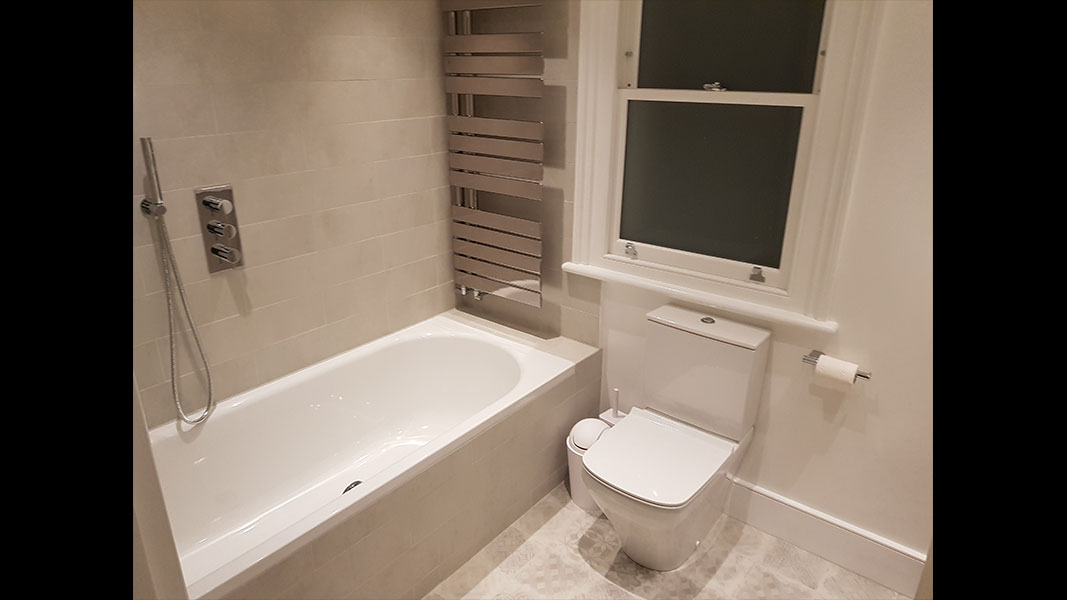 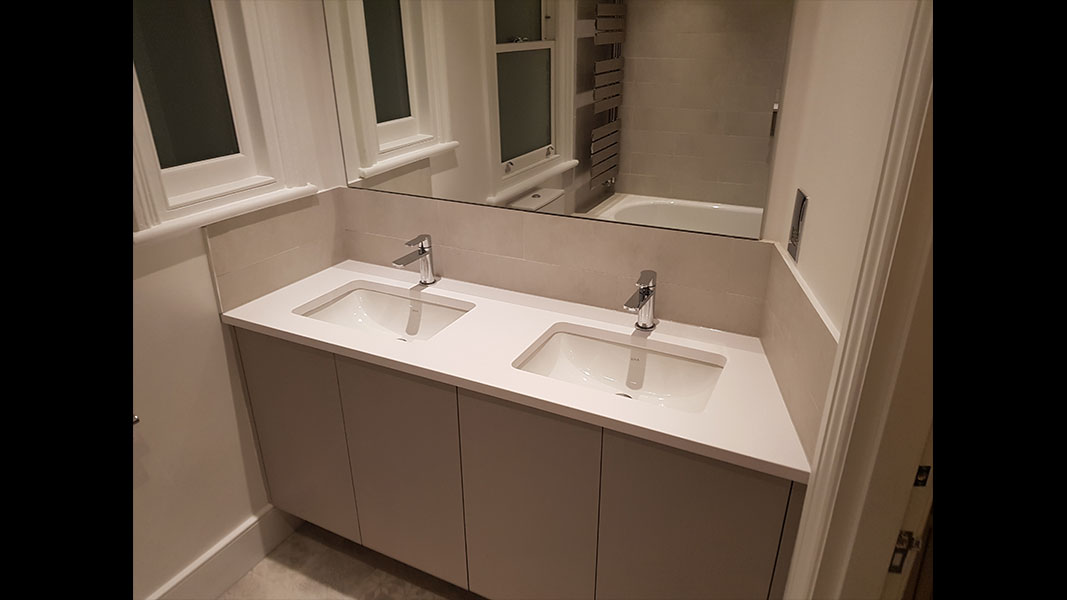 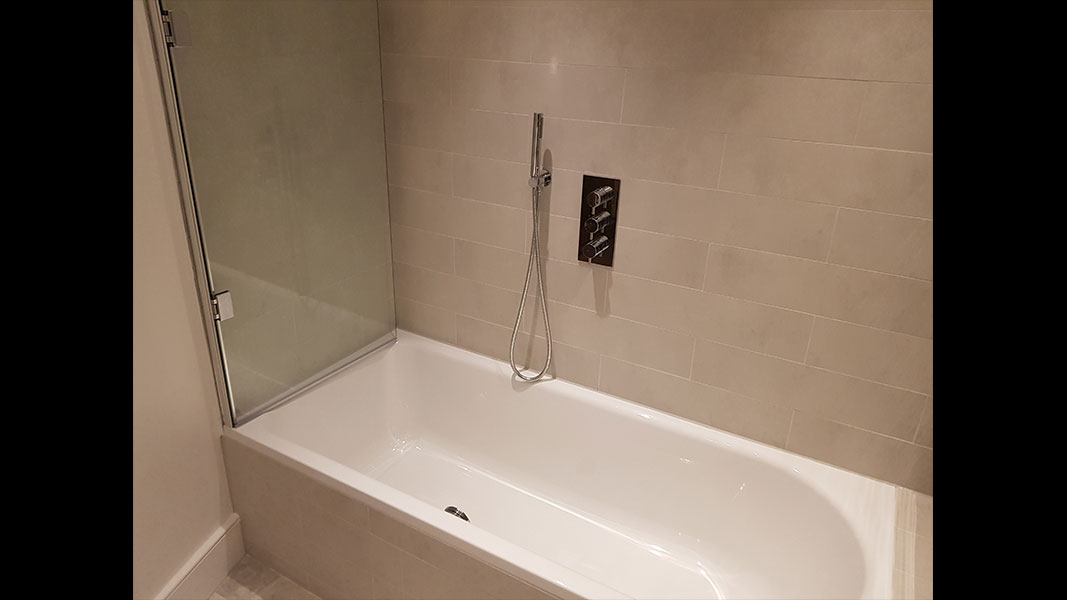 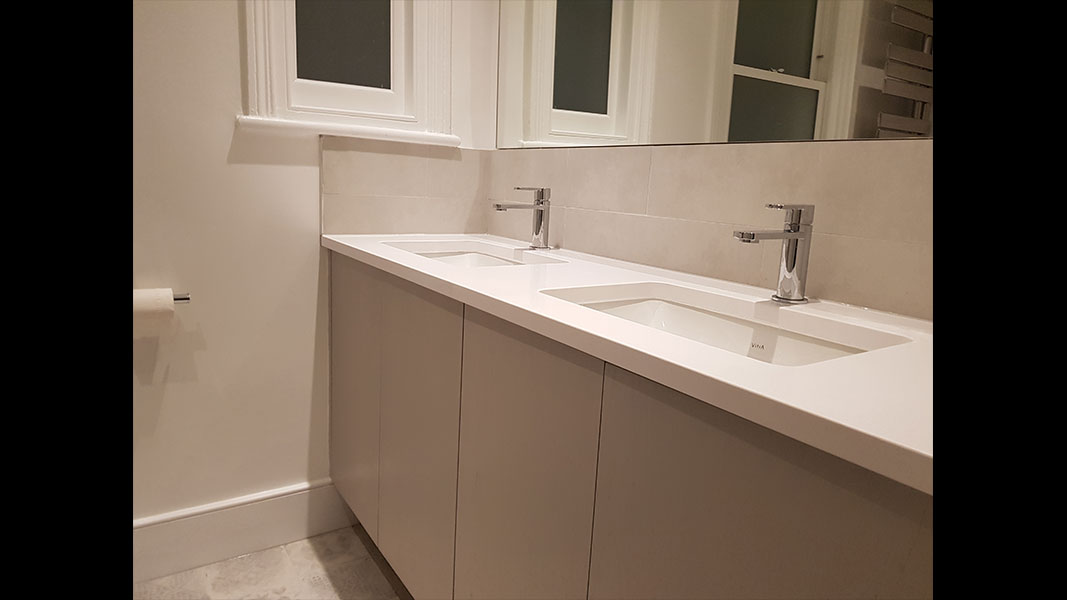 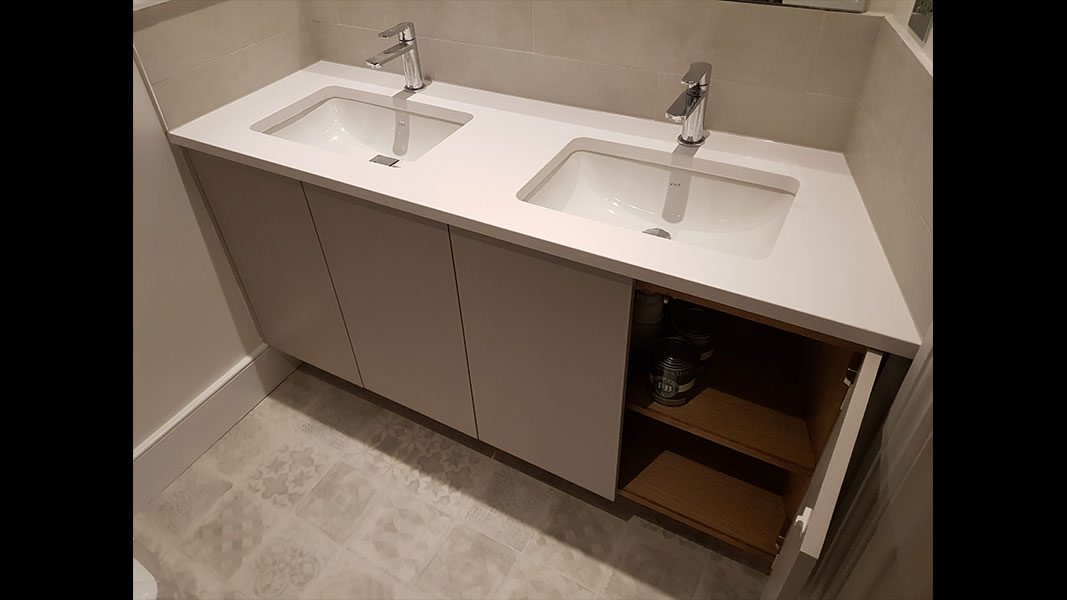 Laurence and Faith Zage approached The Bathroom Workshop after receiving a recommendation from a close friend of theirs/past client of ours. They got in touch with us to help them redevelop both their main bathroom and the en-suite in their loft conversion. This page will focus solely on the renovation of their main bathroom, which included the creation of bespoke his and hers vanity unit.

The bathrooms initial layout was rather strange and made it uncomfortable to use certain parts of the bathroom. Our first priority was, therefore, to consider what changes could be made to the layout in order to improve the functionality of the bathroom. Furthermore, the bathroom contained a hatch in the ceiling which reduced the amount of possible lighting. Our team took measurements of the original bathroom and surveyed the original plumbing and electrical situation.  They discovered that the greatest way of improving the layout of the bathroom would be to change the position of the door, so as to relocate the vanity unit. The proposed changes were drawn up and rendered into 3d CAD plans. They were presented to the Zage’s who were very pleased with the team’s ingenuity. A fixed price quote was provided for the works described in the plans and this was swiftly agreed upon by the Zage’s.  As the Zage’s had opted to undertake the interior design portion of the renovation themselves, our interior designer instead walked them through viable options in terms of the fittings (toilet, shower steam generator etc) which were then ordered through The Bathroom Workshop.

The initial stage for our construction team is always to provide the appropriate protection to the client’s home. This requires fitting the most durable carpet and wall protection, as well as installing an air extraction system to filter the air in our client’s home, removing as many dust particles from the local atmosphere as possible. The team then strips the bathroom of all fittings (existing bath, toilet etc) removing all tiling, plasterboard and plywood flooring. This allows the team to undertake a thorough survey of the bathroom and allows our in-house plumber and electrician to update all existing connections with new wiring and piping. Any changes to the position of fittings such as those of the toilet, bath etc are also adopted by the plumber. The team then focused on changing the position of the door. This involved opening up the partition and blocking the original opening to create a new opening in the centre of the bathroom. Once completed the team fits new plasterboard to the walls and OSB boards to the floor with backer board secured above. The team then tanks the areas around the bath with Ardex Pro-tanking system. The underfloor heating kit is then installed and tiling of the floor and walls begins. Once completed, the final electrical connections are made, and grouting and decoration is completed. The final stage involves installing all of the fittings and testing them to make sure they are working correctly. This project also involved the creation of a his and hers vanity unit which was created within our offices. The marble worktop was created by a stone company which we regularly liaise with in these instances. The unit was created to fit exactly within the space available and was created out of oak. It was then hand painted externally and varnished internally.