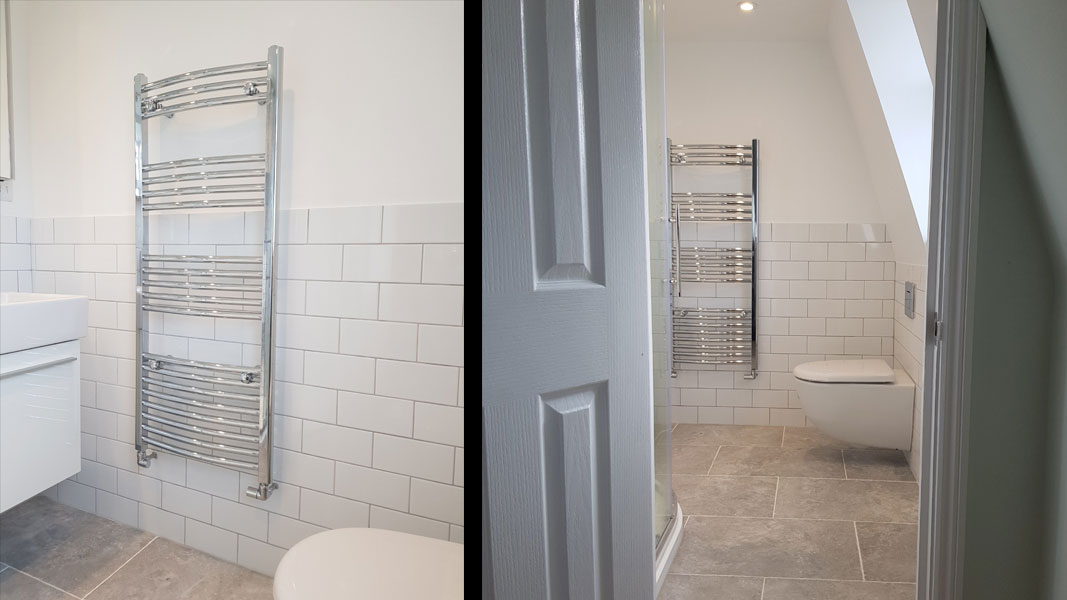 Andrew Bellhouse contacted The Bathroom Workshop with the aim of renovating his outdated en-suite bathroom. Our designer’s first met with Andrew, on site, to understand what it is Andrew wanted to achieve from the redevelopment. After discovering Andrew’s annoyance at the size of the original shower and the severe lack of storage space within the original bathroom, the design consultants conducted an in-depth survey of the site, looking at the original plumbing and electrical set up. They returned to our offices and began creating new plans and 3D CAD renders from these measurements. Our designers then presented Andrew and his family with a variety of layouts which would be possible in his bathroom. After selecting their favourite, they were presented with a fixed price quote which covered the cost of all labour and building materials. This price was accepted and we then proceeded to present Andrew and his family with a catalogue of the fittings (toilets, shower enclosures, vanity units etc) which we could supply directly from the manufacturer. After choosing and ordering the items through our sales team we then stored them in our offices until they were ready to be installed, so as not to clutter up Andrew’s home with boxes.

Our first priority when starting any project is to protect the client’s home as much as possible. To do this we fit the most durable carpet and wall protectors as well as a dust extracting fan to filter the atmosphere within your home. The team then began stripping the bathroom to its shell, removing all existing fittings, plasterboards, wooden flooring, tiles etc. With the bathroom exposed our in-house plumber began replacing the existing plumbing with brand new pipes and connections to prevent any future leaks and accommodate for any new changes in the bathrooms layout. Once the plumbing and electrics were updated, the team began creating the new partition which would encase the his and her’s niches. Once completed the moisture resistance plasterboard was fitted across the entire bathroom. The shower walls were then tanked with Ardex pro-tanking system to create an impermeable seal behind the tiles. The underfloor heating kit was fitted before tiling the bathroom floor and walls, and the shower tray was then fixed the floor. Once decorated and grouted the shower fittings were transported from our offices to the project and installed, including the shower enclosure, hanging toilet and vanity unit. The appliances were all tested and the completed bathroom was presented to Andrew and his family who were now content with the much more spacious shower and the increased storage.